land to expand the course to 18 holes, but the Appleton Park Board felt the land cost was too high. By 1940, however, talk resumed regarding the purchase of an adjacent 87-acre farm with the mortgage to be repaid by golf fees. The option was not considered because the Knuth Farm was south of the existing golf course and outside the City limits. A generous gift from Estelle Reid allowed the golf course to expand from its original 9 holes to 18. Estelle, the daughter of Thomas Reid former owner and editor of The Appleton Post bequeathed her money to many organizations which enhanced the City of Appleton. First, her money established a Library Science scholarship at Lawrence University, and second she allocated funds to improve recreational opportunities through parks and playgrounds. In August of 1940, a judge ruled the City of Appleton could use $10,000 from the will of Estelle Reid to develop an addition to the municipal golf course. The following month, the Park Board closed on the purchase of 52 acres for $11,254.40 plus $1,339.50 in special assessments. A week later, construction started on the second nine, which opened in April 1941. Reid Golf Course was officially dedicated on July 23, 1941, as an 18-hole course. The name was changed from Appleton Municipal Golf Course to Reid Municipal Golf Course in the 1950’s to honor Estelle’s legacy. The plaque announcing the name change was originally placed on the first hole but has since moved above the fireplace in the clubhouse. The name has been shortened to Reid Golf Course in recent years.

The stone clubhouse was dedicated and opened on July 30, 1950. It was extensively remodeled in 1995. The entire interior of the clubhouse was renovated, including the pro shop, clubhouse manager’s office, concession area, restrooms, locker room, lounge area, mechanic systems, new roof, and exterior painting.

According to records, the Appleton City Golf Tournament has been an important annual event at Reid Golf Course each June dating back to 1946. Starting in the 1950s, a second major annual golf competition began when the Appleton Post-Crescent sponsored the Fox Cities Amateur Golf Tournament starting in 1955. The Fox Cities Amateur Golf Tournament was discontinued several years later, but resumed in 1967, again being sponsored by The Appleton Post-Crescent. Doug DeVries, golf course superintendent at Reid from 1981 to 2014, says Reid has matured into a golf course where loyal customers come to play reasonably priced golf on a high quality, manicured, park style course. Reid is conveniently located and allows golfers to easily score while having fun.

st golfer who regularly played at Reid Golf Course was Appleton native J.P. Hayes. In 1984, at age 18, Hayes captured both the Appleton City Golf Tournament and Fox Cities Amateur Tournament at Reid Golf Course, a prelude to his later victories in the Wisconsin State Amateur Championship and eventually ascending to golf’s highest level, a member of the PGA Tour. Hayes played on the PGA Tour for 12 years since turning professional at age 22 and won the 1998 Buick Westchester Classic with a birdie on the first playoff hole over Jim Furyk, who would go on to become one of the world’s top golfers. Four years later, Hayes notched his second PGA Tour title with a dominating three-shot victory in the John Deere Classic.

Reid Golf Course is consistently recognized as the best public golf course in the Appleton area. The course provides golfers of all ages the opportunity to play this fun, yet challenging sport. 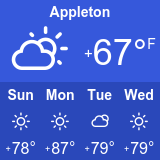